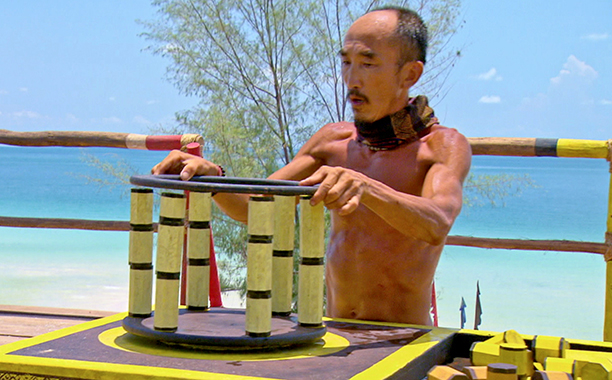 Are you a Survivor fan?

The chicken cackled and flapped its feathers as Tai Trang lovingly petted his adopted friend, “Mark.”

Tai, a slight, balding Asian man, made it to the final 3 of the Survivor season finale and was pleading his case to the jury as to why he should be crowned sole survivor.

Throughout the season, Tai stood out as a charming, kind man who is passionate about protecting animals.

Tai convinced the tribe to spare the life of “Mark” the chicken, despite their starvation.

They didn’t have the heart to make dinner out of Mark out of respect for Tai’s values of all human and animal life.

Tai touched the jury members with his heartfelt confession as to why he “flipped alliances” in the game,
explaining that he was afraid and felt threatened by his two bigger, more manly alliances.  His authenticity and vulnerability were refreshing.

Tai remained true to himself and maintained compassion and love for others (what I deem a Worthy Advocate for Self) while playing a game that intrinsically brings out the greed and competition in others.

Disappointingly, Tai received no votes to be sole survivor from the jury, BUT…his big heart captured the
attention of pop star Sia, who unexpectedly came on stage and personally awarded Tai $50,000 of her own money and another $50,000 to his favorite animal charity.

What would it look like for you to be a worthy advocate for yourself? Are you a caregiver?

Come and get celebrated, recognized, appreciated, and loved on!

Let’s make your life a bit easier, shall we?