(blog) Forgiving your ex is for YOU 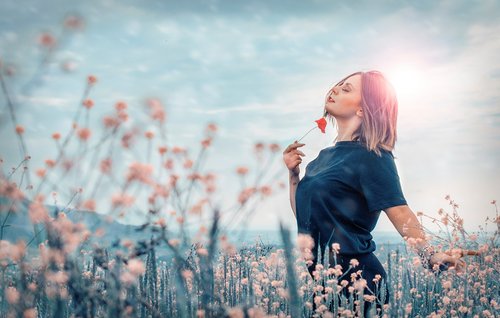 Last week we talked about your readiness to forgive your ex
and the benefits of why you’d want to do it.

One of those benefits was that forgiveness is for you, not them.

Let’s drill down on this benefit a bit more. To illustrate how it’s
true, meet Fanny.

Fanny, from Flaming Mad to Forgiveness

Fanny met her husband, Paul, when she was 15 years old. They
were high school sweethearts. He was super talented in soccer
and eagerly recruited by top colleges. Paul barely scraped
by as far as his grades, but he was able to graduate because his
buddies helped him to cheat on exams.

Fanny was instantly smitten by Paul, his deep blue eyes, perfect
smile, dimples, slender body, and indescribable charm. She
always said he could sell snow to the eskimos.

But…what quickly became almost as obvious as his good looks was his
bottomless need for attention and his desire to be the best in
soccer, even if that meant severely damaging another’s self-esteem.

He was absolutely relentless in the pursuit of winning at soccer.
He once proudly admitted to Fanny in confidence how, when
his school’s main competitor from another high school was going
to be playing him that night in a pivotal game, he took meticulous effort
to slip a sedative into his pre-game energy drink so he’d be out
of it and wouldn’t stand a chance against Paul and his team.

His plan succeeded, and their school won the coveted state
championship that year. Paul never expressed remorse. Of
course, this behavior was a red flag to Fanny, but she swept it
under the rug as an anomoly.

Over the years, she witnessed Paul repeat cruel stunts like
this, and yet he was always so sweet to Fanny. She decided,
”Oh well. As long as he treats me like a princess, I should be
fine. He will take good care of me.”

They married after both graduated from college. Paul ended
up getting a business degree and went into pharmaceutical sales,
making a huge salary. He encouraged Fanny to stay home with
the 3 children, convincing her that she could pursue her art career
when the kids were grown.

Turns out Paul was as ruthless in business as he was in soccer.
He became a fast success because of this drive and determination
to be the best, but often to the detriment of anyone who got
in his way. Fanny had this thought more often than she cared to
admit, “I’m just glad I’m not Paul’s enemy.”

The years went by, and Paul proved to be a great provider, giving
his kids the best education, lavish vacations, and anything money
could buy. He couldn’t give his kids the one thing they wanted more
than anything, his time, love and attention. He was an absent father,
and more often than not, didn’t even go on vacations with the
rest of his family.

Fanny was very lonely and deeply craved his attention, because
he no longer treated her like a princess, but more like a live-in maid.

There were no intimate conversations, no quality time, no affectionate
words. He still bought her expensive gifts but she didn’t even care
about getting one more “show-off” ring to make others jealous.

Yet, she knew she signed up for this life and so continued to cook Paul
dinners, clean his laundry and his house (she’d been raised to humbly
do these things herself rather than hire out). She had resigned herself to
living a mediocre life, to settling for “good enough.”

Then February 18th, 2020 happened. Paul had forgotten his cell phone
at home when he’d left in a flurry of chaos due to some “emergency”
at work.

Fanny noticed the phone and ran it outside to see if she could catch
Paul before he left, but no luck. Text messages began flooding his phone
from a hysterical Meg character.

Apparently she’d been in a bad car accident and was at a nearby
hospital. Paul had responded at first to say he was on his way. Then
more texts kept coming, which Fanny hesitantly read.

Strange…she’d never heard him mention a Meg before. So naturally
she kept reading and saw the messages went way back to even several
years ago.

Fanny began trembling when she quickly realized this was not
just a friend, but a romantic interest. “I love you, Paulie. I can’t wait
to get a hold of you and _________.” She couldn’t even repeat the vulgar
obsenities from this woman. She was extremely hurt, but not entirely surprised.

To make a long story short, Fanny confronted him when he got
home. He couldn’t deny it, of course. He didn’t even try to protect
her feelings, but said he’s felt nothing for her for years, and it was probably
best she find out now so they could both stop living this lie.

Fanny found a lawyer and filed for divorce. But Paul proved to be
just as competitive with the divorce as he was in sports and business.
He wanted to give her nothing because he didn’t see the value she
brought to the table these last 18 years. Being his “chief cook and
bottlewasher” meant little to him.

Eventually her lawyer helped her to gain a decent share of what
she was owed, but it dragged out for nearly 2 years. Fanny was
left with 3 indiffernt children who didn’t show her much more
respect than Paul did.

Fanny was bitter and resentful. She’d devoted the last 25 years of her
life to this man she fell in love with him when she was 15, when she
didn’t know who she was.

He treated her now like a dirty ‘ole rug he was continually wiping
his muddy feet on. It felt like their whole relationship was a facade,
because she realized that she never really knew the real Paul.

This resentment went on for two years as they painstakingly divided
what they’d woven together the last 18 years of marriage, the house,
the contents in the house, the 401(k)s, rental property, the kids and
where they’d live since none were yet 18 years old, the pets, etc.

With each passing day, Fanny felt what little remaining self-esteem
she had diminish. She hated Paul, wanted to see him suffer. As her
loathing grew, she felt worse and worse.

She began to experience terrible migraines, had rashes and hives
break out all over her body, her joints began to ache, her hair fell
out, she had acne on her face, and boils near her bottom. She was
a mess!

Fanny knew something had to shift because fantasizing how Paul
and his girlfriend, Meg, might die in a fiery car crash wasn’t getting
her the life she wanted.

Forgiving Paul FOR HER

Then one day she heard a podcast about the power of forgiveness
and how it was for HER, not the person she was angry at. This got
her attention. She decided to dust off one of her blank journals and
began to journal what she was feeling.

As she wrote and wrote, she sobbed. She realized that every moment
she hated on Paul, she was giving more and more of herself away. She
was shrinking. It was destroying her health, her mind, her soul.

She grieved for the young girl who had searched for love from Paul.
She felt compassion for the part of who felt so deeply betrayed by him.
By forgiving Paul, she wasn’t wiping his slate clean. That was Paul’s job.

He would have to deal with the consequences of his actions. Justice
would be meeted out to him by a force bigger than her. She would no
longer be responsible for him.

Fanny Had Betrayed Herself

She also woke up to the idea that it was actually SHE who had betrayed
herself over the years, by not asking questions, by allowing herself to
stay with a man who demonstrated lack of integrity over and over again.
The red flags were everywhere, and she ignored them. But instead of
shaming herself for her choices, she decided to be gentle on herself.

We do better when we know better.

Stay tuned to next week’s blog when we will continue to explore self-
forgiveness through Fanny’s story.

Remember: Forgiveness is an act of self-love more than anything.

Schedule a free Confidently Navigate Divorce/Loss session
with me. Take back your power from the one who angers you.
You are 100% responsible and 100% deserving of love.